In order to examine underlying mechanisms of the impressive regeneration in Dendrorhynchus Zhejiangensis, a two-dimensional gel electrophoresis (2-DE) combined with mass spectrometric analysis was employed. 70 proteins involved in regenerative process were identified and 33 proteins were up-regulated and others were down-regulated in fracture injured model. Among them, about 79% were cell cytoskeleton proteins and motor proteins. As the representatives, the expression profiles of Actin and Gelsolin-like protein (GSN), both of which were involved in cell motility, in response to body breakage of nemerteans were examined. Two genes showed similar expression patterns during regeneration process and both of them were first constantly up-regulated at 1h and 3h after being broken, then down-regulated to a lower level at 3rd day. The results suggested that Actin and GSN play important roles in regeneration of D. Zhejiangensis. 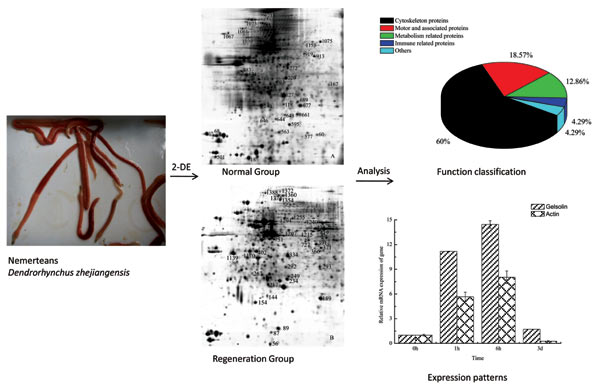