Diabetes Mellitus is a chronic metabolic disorder that is often associated with various complications including micro- and macro- angiopathies. The increase in mortality rates associated with these complications is one among the major factors that compels to define proper therapeutic strategies. Protein signatures including their post-translational modifications that are modulated under various disease conditions enabled the biomarker discovery processes and thereby facilitate to predict and diagnose the disease onset at an earlier stage. Identification of the post-translationally modified proteins not only enabled the biomarker prediction associated with various disease conditions but also has a great impact in target based drug discovery process. Mass spectrometry based proteome profiling aided the identification and characterization of these site specific modifications that had a huge impact on various functional aspects in a biological context. In this review, we tried to compile and discuss the information available regarding some of the modified proteins with regard to deregulated glucose metabolism. Several commonly observed modifications including glycosylation, hydroxylation, phosphorylation, nitration, nitrosylation and carbonylation that seem to have a major role in the management of diabetes disorders are summarized. Moreover, the importance and impact of less explored post-translational modifications such as palmitoylation, carbamylation, deamidation and SUMOylation that are associated to diabetes related complications are described. 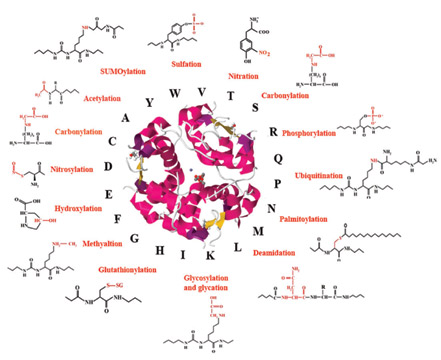