Proteomic Analysis of the Kidney in Rat Biliary Cirrhosis


Background: Hepatic cirrhosis is associated with a variety of hemodynamic and hydrodynamic abnormalities, including renal dysfunction with salt and water retention leading to ascites and dilutional hyponatremia.

Objective: In the present study, a proteomic analysis of the kidney of rats subjected to bile duct ligation (BDL) has been carried out in order to identify the proteins altered under this condition. Method: The experiments were performed at the fourth week after BDL, and the protein mixtures were separated by two-dimensional gel electrophoresis using the differential in-gel system (DIGE). An internal standard composed of equal amounts of the above 12 extracts was labeled with Cy2, and loaded onto six gels. Results: More than 4,000 proteins were labeled and numbered, and around 60 proteins were differentially expressed in the kidneys of BDL rats as compared to the controls, as analyzed by De- Cyder software. The respective spots were excised and digested with trypsin for MALDITOF/ TOF peptide mass fingerprinting analysis. Some of the proteins down-regulated in the kidney of the BDL rats were Ezrin, Moesin and Regucalcin, whereas Annexin-4, Cathepsin B and Heat Shock Proteins were significantly up-regulated. Discussion: The relationship of these proteins to the systemic and renal abnormalities seen in BDL rats is discussed. 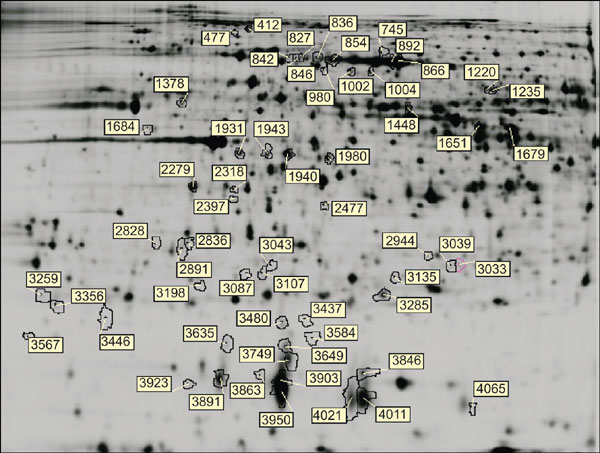