Objective: Structural studies of spliceosome machinery and proteins involved in gene silencing mechanisms are of prime importance as it is poorly understood in Neurospora crassa. In view of this, the present study was undertaken for in silico identification of RBPs in N. crassa and making their catalog based on the function.

Method: Briefly, by in silico approach, the comparative proteomics strategy was used to identify the RBPs. The network analysis was performed based on the STRING interactions, docking studies between protein and RNA by NPdock whereas ClusPro was used to infer protein-protein docking.

Results: A total of 313 RBPs in N. crassa were identified and pathway analysis has revealed about 98 RBPs which are involved in different known pathways based on the function. Based on the function 12 RBPs were found to be observed in one of the most critical mechanisms, the post transcriptional gene silencing (PTGS) in Neurospora. Majority of the RBPs were involved in spliceosome mechanism and mRNA related pathways, hence the RBPs involved in these pathways were mapped and modeled by merging the interlinking pathways viz., splicing, RNA transport and degradation. From the interaction analysis, the hub protein was found to be NCU06318. This hub protein was docked with its best interaction partner NCU11357(a cell cycle control protein). The PAZ domain containing PTGS proteins which can associate with dicer like proteins were observed in qde-2 and hence were docked with dcl-2.

Conclusion: The protein-protein interactions were depicted as strong non-covalent interactions which indicates that these proteins are associated in the regulation. In this study, a detailed report of the protein (RBP) and snRNA structures with their interactions are presented which enables us to understand the role of RBPs in spliceosome pathway and gene silencing mechanisms of N. crassa. 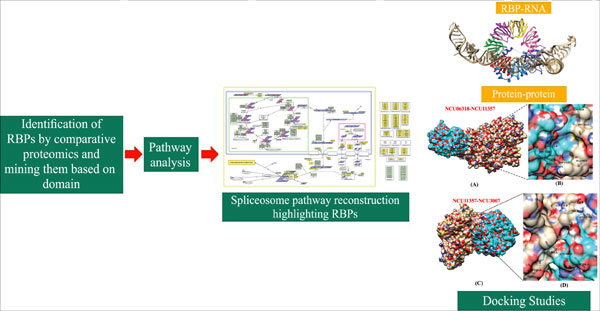