Hsp70 Escort Protein: More Than a Regulator of Mitochondrial Hsp70


Hsp70 members occupy a central role in proteostasis and are found in different eukaryotic cellular compartments. The mitochondrial Hsp70/J-protein machinery performs multiple functions vital for the proper functioning of the mitochondria, including forming part of the import motor that transports proteins from the cytosol into the matrix and inner membrane, and subsequently folds these proteins in the mitochondria. However, unlike other Hsp70s, mitochondrial Hsp70 (mtHsp70) has the propensity to self-aggregate, accumulating as insoluble aggregates. The self-aggregation of mtHsp70 is caused by both interdomain and intramolecular communication within the ATPase and linker domains. Since mtHsp70 is unable to fold itself into an active conformation, it requires an Hsp70 escort protein (Hep) to both inhibit self-aggregation and promote the correct folding. Hep1 orthologues are present in the mitochondria of many eukaryotic cells but are absent in prokaryotes. Hep1 proteins are relatively small and contain a highly conserved zinc-finger domain with one tetracysteine motif that is essential for binding zinc ions and maintaining the function and solubility of the protein. The zinc-finger domain lies towards the C-terminus of Hep1 proteins, with very little conservation outside of this domain. Other than maintaining mtHsp70 in a functional state, Hep1 proteins play a variety of other roles in the cell and have been proposed to function as both chaperones and co-chaperones. The cellular localisation and some of the functions are often speculative and are not common to all Hep1 proteins analysed to date. 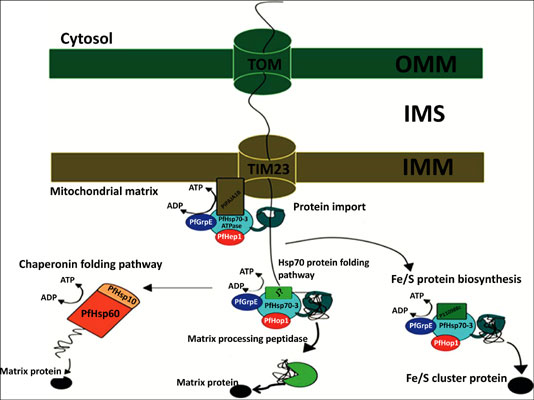