Background: Gestational Diabetes Mellitus (GDM) is one of the most common medical complications of pregnancy. The untreated GDM affects both the baby and mother during gestation as well as presents the risk of subsequent type 2 diabetes in mothers and babies.

Objective: To determine the effect of GDM on plasma proteomics as variable plasma proteins can be secreted by the cells at the pathological sites and can serve as a biomarker of the disease.

Methods: Blood samples were taken from 400 pregnant women at early second trimester and they were followed till early third trimester or until the development of GDM. All the pregnant females were sampled again in 3rd trimester. Overall 42 pregnant females developed GDM. These females were grouped as GDM I and GDM II, before and after the development of gestational diabetes, respectively. An equivalent number of pregnant women who did not develop GDM served as control I and control II in early second and third trimester, respectively. Blood samples from all the groups were subjected to 2D gel electrophoresis.

Results: Nineteen protein spots were differently expressed between GDM and control groups, two spots were further confirmed by LC-MS/MS as Retinol binding protein A4 and Transthyretin. These two proteins were found to be up regulated in GDM group in early second trimester as well as early 3rd trimester.

Conclusion: Transthyretin and Retinol binding protein 4 can be used as predictive plasma biomarkers of GDM that might help in the identification of at-risk pregnancies, hence, providing the best opportunity for early treatment in order to prevent the onset or progression of the disease. 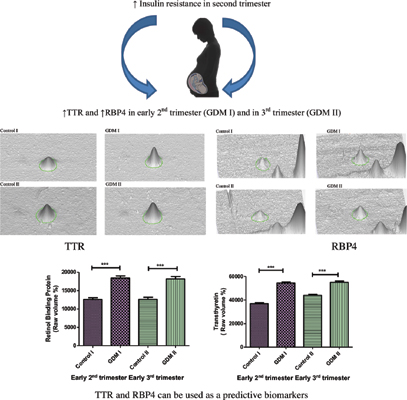