Background: Invasion of HIV in human occurs through DC-SIGN’s interaction via the mucosal lining during sexual transmission. Bovine Lactoferrin (bLF) has been known to hinder this invasion via its interaction with DC-SIGN. Hitherto, protein assays have taken place but molecular-level studies remain unexplored.

Methodology: The 3D structures of the three proteins were studied. After protein docking (bLF_DCSIGN and gp120_DC-SIGN), the complexes underwent simulation. Stability parameters and binding patterns with residues were explored.

Results and Conclusion: ΔG values, net area for solvent accessibilities and conformational fluctuations in DC-SIGN affirm the binding of bLF with DC-SIGN to be more spontaneous and steadier contrary to that with gp120. Residue participation inferred more interactions to occur from bLF complex with a greater percentage of arginine (which strengthens the interaction) while electrostatic interaction between Lys45 (bLF) and Glu26 (DC-SIGN) strengthened the complex. Arg37 played an active role from DC-SIGN to form the stabilizing charged-neutral H-bond, while Lys63 from bLF formed two more such stabilizing charged-neutral H-bond with DC-SIGN. The prime binding sites in DC-SIGN; Arg37 and Gln34 occupy helices. The binding pockets in DC-SIGN may be blocked by bLF spontaneously, to hinder their interaction with gp120. No ionic-ionic interaction was observed from gp120_DCSIGN complex. 88th residue, which was a predominant residue in the binding pocket was found to experience a conformational shift from coils to sheets after interaction of DC-SIGN with bLF. This would instigate the pharmaceutical research as non-toxic LF would be economic as a remarkable peptide inhibitor opposing HIV. 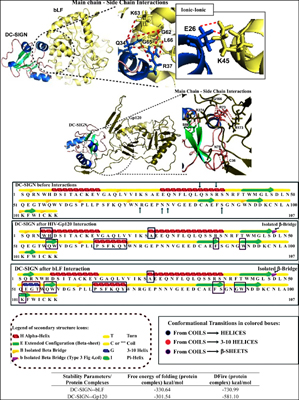